The project aims to gain a deeper understanding of how to measure the impact of the Barnahus model in criminal proceedings and to provide objective results on the impact of the first Barnahus in Spain. Our main hypothesis underlying the testing of the assessment methodology is that the implementation of the Barnahus model may increase the number of cases involving child sexual abuse that is being revealed to the Criminal justice system and that can be prosecuted and sentenced. We also expect that Courts in Tarragona will prioritise the use of pre-constituted evidence, thus reducing the number of statements of the child victims in front of professionals while enabling an increase in the prosecution rate and, presumably, also in convictions. Overall time elapsed since the case was opened is expected to be reduced. The testing will confirm or refute the hypothesis, thus providing a snapshot of the effects of the Barnahus pilot. All data collected will be disaggregated whenever possible in terms of sex, age, disability, nationality and any other personal or social circumstance to ensure that results allow for the measurement of differences.

Apart from developing the tool, we will carry out exchanges and training activities to encourage awareness-raising among professionals and a better adjustment of legal tools for protecting child victims in criminal proceedings. The testing results in the Barnahus pilot in Tarragona will be key to identifying the needs of professionals and developing awareness-raising, capacity-building and training activities for criminal justice professionals. We will design content for tailored and evidence-based training for judges, prosecutors, lawyers, police officers, forensic doctors and other judicial staff on child-friendly justice and mechanisms to reduce secondary victimisation. Exchange activities will be developed throughout the project, and training will be provided by the end of the project.

Child sexual abuse is a serious social problem that has long-lasting negative effects on the victim’s health. Although prevalent in our countries, criminal reporting is low and reported cases are often dismissed in Court. Research highlights the complexity of prosecuting CSA, which lies mainly in the challenge to present evidence to the Court.

In July 2020, the first pilot to implement the Barnahus model in Spain was launched in Tarragona (Catalonia). During one year, more than 150 cases were received in the Barnahus in Tarragona.

The recent introduction of the Barnahus model in Catalonia provides the opportunity to analyse its capacity to become an evidence-based mechanism for the reduction of secondary victimization of child victims of CSA and to improve the involvement of criminal justice professionals.

The importance of the project lies in being the first attempt in Spain, and southern Europe, to obtain key data on the changes that the Barnahus model can bring about in this area.

Having reliable data is key in designing interventions that reduce any negative impact on the child’s emotional wellbeing, but also in improving coordination between professionals in multidisciplinary teams, particularly in the criminal justice system, to allow an increase in the number of favourable sentences for child victims.

This project is funded by the Oak foundation 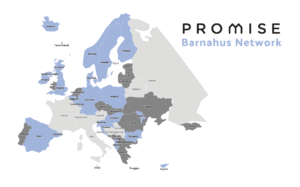